The children at The Buchan School took part in the Biggest Sing organised by Young Voices, on Tuesday 15th June.  Young Voices is trying to break its own Guinness World Record for the Largest Simultaneous Sing and Sign event.

The event was streamed live from the O2 Arena in London and children from both Prep and Pre-Prep came together to sing in the Buchan Gym. They had learned the song  ‘Lovely Day’ written by Bill Withers during Music with Mrs Garrett and sang along with about 350,000 other children around the world as well as the UK. 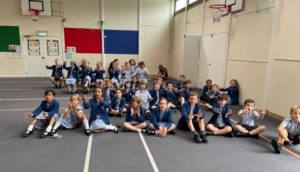 Despite the fact that Form 4 were on a field trip in Glen Maye, they still managed to take part and sang live outside by the river, at the same time!  The children have been asked for a voluntary donation of £1 which is going to Place2Be – a mental health charity for children. We will let you know if the World Record attempt has been successful!